We declare that The Outpouring has ushered in the glory of the Lord into the city of Abuja. The will of the Father is manifested throughout the city without fail.

We decree that the Lord has shaken the city of Abuja and the remnants are men and women after His heart, a generation that seek the Lord. Indeed the latter glory of Abuja is greater than the former.

We decree that the power of the Most High God is seen in every industry and the Lord has established righteous men,  dealing righteously in the palaces. Watchmen who fear the Lord are guarding the city gates.

A large crowd like unending clouds gather at the grounds of The Outpouring Abuja; a people with receptive hearts drawn by the Lord unhindered by any outside force have come to the worship of Yaweh.

We declare that every word spoken by the Ministers at The Outpouring Abuja, is a seed that draws the people into a deeper intimacy with the Lord , and a sword that helps people to rightly divide the word of truth, bringing captive every thought that exhalts itself above the knowledge of God. By the utterance that comes with simplicity from the ministers; several souls are won for the Lord, people are delivered from captivity and released into their God given destinies.

We declare that people come to the knowledge of the power in the name and the blood of Jesus and they go on to release this same power throughout the city and globally.

We decree that every element and authorities created by the Father works in favour of The Outpouring Abuja without fail.

By reason of the victories won at The Outpouring Abuja, Nigeria takes its position as a giant on all fronts, she becomes a well watered garden, a spring whose water never fails. Righteousness has exalted Nigeria and the sound of the worship of the Lord rising from Nigeria spreads globally like wild fire. The nations of the world have therefore come the brightness of her rising, great is her peace.

We declare that the Lord has blessed The Outpouring according to His riches in glory. All financial resources are met with an unending supply. Every required skill-set is met with skillfull hands and minds that produce witty inventions. The testimony is that The Outpouring lacks nothing and the people are willing. We experience the favour of the Lord, of kings and of mere men ceaselessly.

We decree that the multitudes that the Lord has drawn to himself by reason of The Outpouring Abuja are now scattered all around the world, with the fire of the HolySpirit, raising the banner of the Lord and spreading the revival globally.

By reason of the victories won at The Outpouring Abuja, our testimony is that all power belongs to our God. Yes, the kingdoms of the world has become the Kingdom of Lord and of His Christ and He will reign forever.

Ilorin is the capital of Kwara State, Nigeria. It is a cosmopolitan city due to the significant immigration of people from other parts of Kwara and the rest of Nigeria.

Ilorin has played host to several moves of God in recent history as many respected fathers of faith broke grounds in ministry in this city.

Come May 2022, the fire of God’s revival will sweep through this land and cause lasting change.

The Outpouring is coming to Ilorin!! 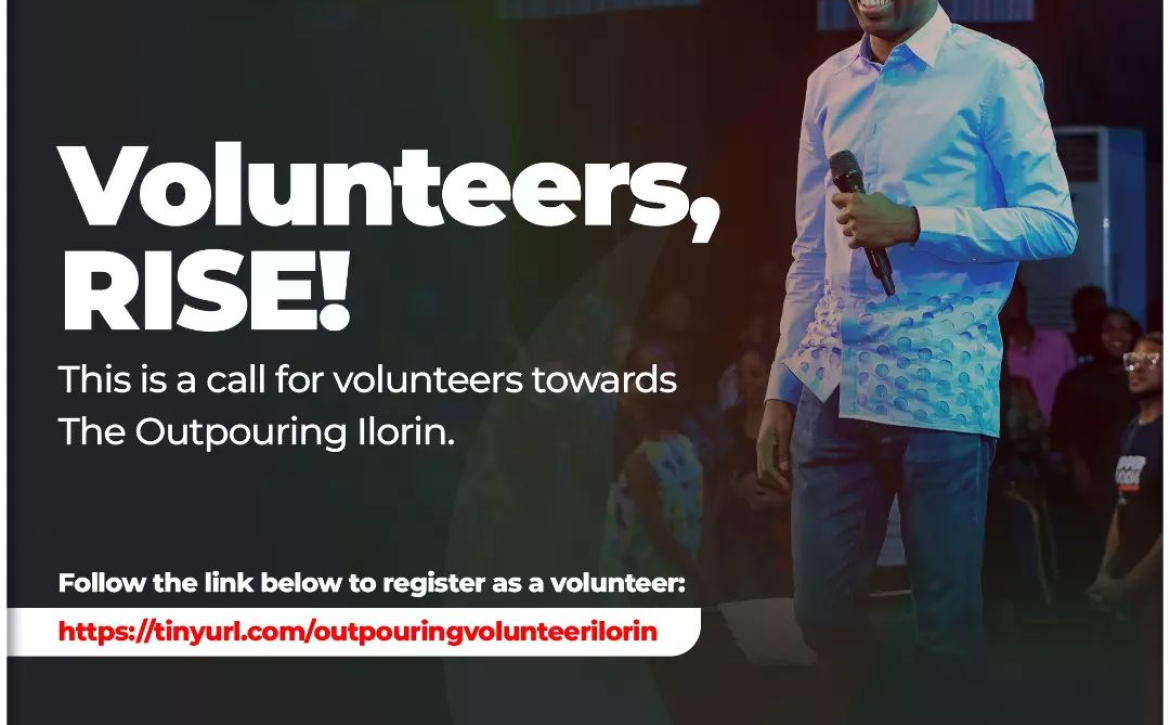 An army is rising, that won’t take no for an answer” 🎼📣

If you want to be a part of this team in Ilorin, register as a volunteer via the link below.

Lift up your heads o ye gates of Abuja, be lifted up ye everlasting doors, the King of glory shall come into Abuja and the greatness of His mighty works shall be experienced in every home.

We declare that The Outpouring has ushered in an unprecedented dimension of God into the city of Abuja and into the lives of all who show up and tune in. Abuja is the Lord’s and all those who dwell in it!

We decree that the testimony in Abuja and all its neighbouring cites is that a new generation of people who seek the face of the Lord is all over the city. From the shouts of worship at The Outpouring Abuja, a new day of fellowship with the Father has begun in the city.

We declare that God has released a sound unto the earth and has given utterance to every Minister at The Outpouring. Their sounds and words have won several souls to the Lord, their words have delivered people from captivity and have released people into their God given destinies.

See, a large crowd with receptive hearts descended into the grounds of the Outpouring unhindered by any outside force. Like an army that does not break ranks, from organisation to execution, the Outpouring Abuja is seamlessly produced and executed with precision on every goal.

By the power of the Holy Spirit, the impact of The Outpouring Abuja has spread throughout Nigeria and globally such that we gain the attention and partnership of global giants. Following the Outpouring, righteousness exalts Nigeria and there is peace within her walls.

We declare that God has poured out His blessing on the Outpouring according to His riches in glory, the testimony is that the Outpouring lacks nothing as all financial and human capital needs have been met with favour from Kings and the expertise of men, indeed the people are willing.

All those the Lord has drawn are now scattered around the world with the fire of the Holy Spirit, raising the banner of the Lord; the army has indeed risen.

The glory of the Lord has descended and is displayed all over the city of Abuja and the Kingdoms of this world has become the Kingdoms of our Lord and of His Christ and He will reign forever.

We give all Glory to the Lord who has shown Himself mighty at The Outpouring, Abuja.[/vc_column_text][/vc_column][/vc_row]